Fuzz Your Own API

You've seen what Mayhem for API can do in a demo. Now it's time to fuzz your own!

To start testing an API, you only need to provide two things: a specification describing the API, and a URL where it can be reached. You'll be running something like:

ℹ️ Specifications can be passed to mapi as either local files or URLs.

Mayhem for API is built around OpenAPI 3 specifications. If you have an OpenAPI spec describing your API, you're all set. Pass either a URL or file system path directly to mapi as the <specification> argument!

If you don't have an OpenAPI spec, we support a few alternatives, described below.

If you don't have any of the above, you'll need to do a little bit more work to generate a spec for Mayhem for API to use. The process is documented in detail over here.

Mayhem for API needs to know the URL of your API server. Because the requests come directly from the mapi CLI tool running locally on your computer, this will work for APIs that are:

If the machine running the CLI can access the API - then we can fuzz it! 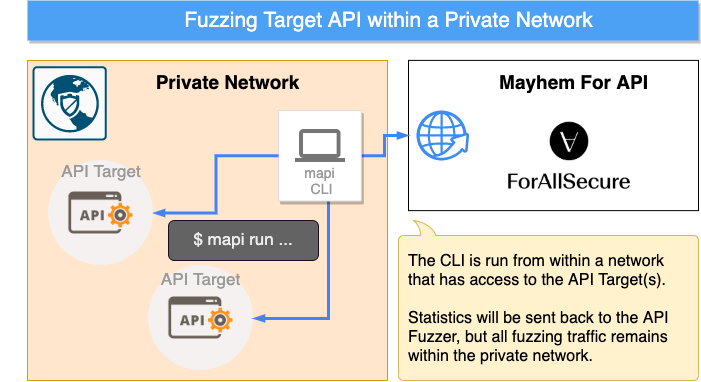 Although it'll work in just about any configuration, Mayhem for API works better the "closer" it is (in network terms) to the API server. For the best results, this means pointing the fuzzer at a locally-running instance of your server.

Never, Ever, Ever Production

Mayhem for API has one job: finding ways to break an API! You should absolutely not give Mayhem for API the URL of your production services to test against.

Organizations with Enterprise plans can run the mapi CLI in 'local' mode by passing the --local flag to calls to mapi run. This will fuzz your Target API, as usual, with some caveats:

What is required to run Mayhem for API in local mode

What is uploaded to Mayhem for API servers for local runs?

What is NOT uploaded to Mayhem for API servers for local runs?

How do I get the results of a local run?

All report formats supported by the mapi CLI will continue to work as described in the the chapter about reporting issues, except for 'Web UI' reporting -- because no results are uploaded the Mayhem for API service.

It is the responsibility of the caller to persist the results of local runs.

Files for conversion (no swagger2 → openapi)

All right, hopefully you've got Mayhem for API configured to test your API, congrats!

ℹ️ If we're already uncovering some issues in your API, you might want to take a detour into the chapter about issues, where we'll go into detail about those results.

For most real-world APIs, the next step is going to be telling Mayhem for API how to authenticate, which is what we'll cover next!